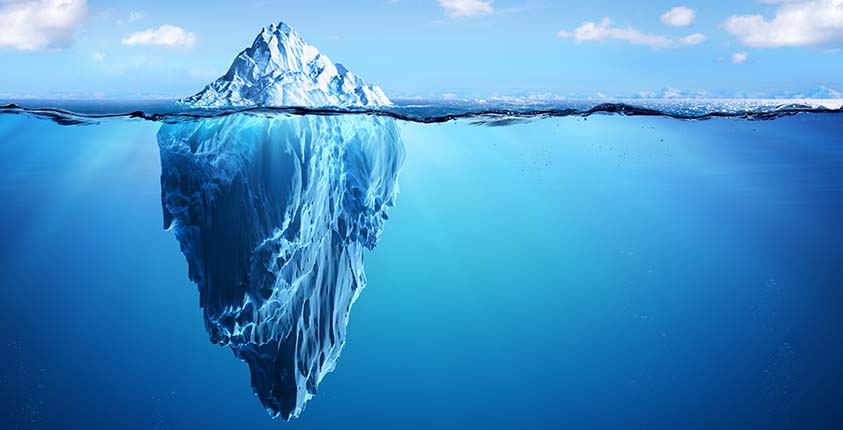 The expression “don’t judge a book by its cover” is a metaphorical phrase which means, “You shouldn’t prejudge the worth or value of something by its outward appearance alone.”

When such advice is ignored―and let’s be honest, we have ALL been guilty of ignoring it―there’s a good chance you’ll miss out on new relationships, fruitful business opportunities, meaningful friendships, and more.

Think about icebergs. Yes, icebergs. We’re all familiar with the expression, “That’s just the tip of the iceberg,” referring to the idea that what we can see is only a small part of the whole. Only about 10 percent of an iceberg is above the water. That leaves 90 percent—by far the greatest part—underwater, unseen, invisible without closer observation. Looking at the shape of the 10 percent, no matter how perfectly you map it, tells you nothing about the shape of the 90 percent.

People are very similar. What we can see on the surface, the easily observed, obvious things, are only a small part. True, they’re not nothing, but they’re far from a complete picture. A person is far more than their resume; knowing their achievements, titles, appearance, and reputation isn’t the same as knowing the person.

When you’re encountering someone for the first time, you don’t know their story. Heck, there are some people in our lives that we’ve been around for years, and we still don’t their story. You don’t know whether they’ve had a terrible tragedy strike, or if they’ve just spent their last dollar on keeping up a spotless façade and are silently, frantically panicking about how to pay next month’s bills. You just don’t know.

When you find someone who really does appear to have it all together, that doesn’t tell you how they got there. It’s easy to draw a straight line from where a person started and where they are now, but that straight line is rarely an accurate portrayal. Someone’s success in the present tells you nothing about the struggles, the failures, the false starts, the rabbit trails and the dead ends they experienced along the way.

The point is, when you prejudge someone, you miss out on all these things. You can easily overlook someone who would be the perfect mentor for you, or an ideal client. Conversely, you can waste your time chasing someone who isn’t a good fit for you or what you’re trying to accomplish in life.

So how do you learn more about the 90% that’s unseen? Well, there is no substitute for getting to know someone, asking questions, and building relationships. Want to know what’s really going on in someone’s life? Get to know them, and ask! Want to know how someone got to where they are now? Ask! Want to know what they’re planning for their future? Ask! Most people are more approachable in reality than we imagine them to be in our minds, and once you make it clear that you’re genuinely interested in them, they’ll share. You’ll learn some things that can help you as you grow personally and professionally, and you just might make some friends, too.