7 Famous Quotes on Failure and the Stories That Inspired Them 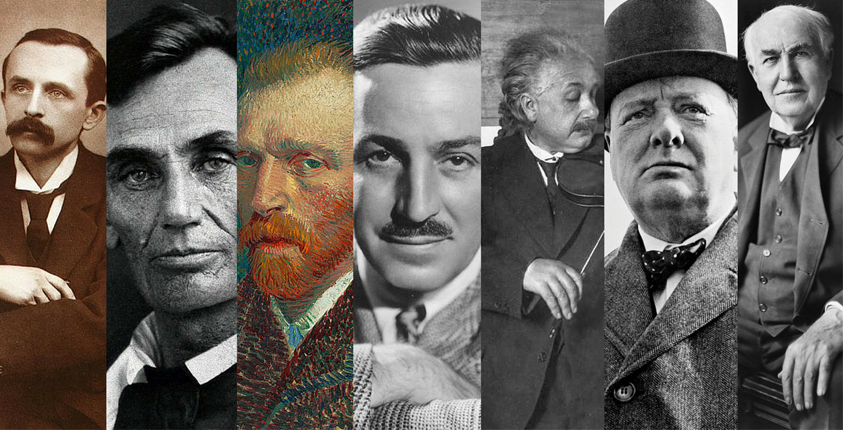 Have you ever been told that you can’t do something? Most of us have. Simply put, failure is a fact of life, especially for entrepreneurs.

It can be devastating, but you can’t let it get you down. Here are 7 famous quotes from people whose success was rooted in failure, and the stories that inspired them.

Churchill was estranged from his political party during the years leading up to World War II.

1. “Success is stumbling from failure to failure with no loss of enthusiasm.” – Winston Churchill

Many know Winston Churchill as a key component of Allied victory in World War II and a driving force behind Britain’s involvement in it, but that wasn’t always the case.

He was actually estranged from his political party over differing ideology in the years leading up to the war. When war broke out in 1939, he was appointed to the British admiralty, and a year later became the British Prime Minister at the age of 62.

Lincoln suffered a nervous breakdown prior to becoming President.

2. “My great concern is not whether you have failed, but whether you are content with your failure.” – Abraham Lincoln

You may be surprised to know that Abraham Lincoln failed – a lot. Here’s a brief rundown of the troubles he faced in the years leading up to his Presidency:

Now, that’s a list. Lincoln was not content with his failures, though, and in one of the greatest stories of persistence ever told went on to become the 16th President of the United States, guiding the country through one of the most tumultuous times of its brief history.

Edison was told he was “too stupid to learn anything.”

3. “Restlessness is discontent – and discontent is the first necessity to progress. Show me a thoroughly satisfied man – and I will show you a failure.” – Thomas Edison

Thomas Edison must have been one restless man. Everyone’s heard his famous quote, “I have not failed. I’ve just found 10,000 ways that won’t work.” But did you know that Edison was told by his teachers that he was, “too stupid to learn anything”? Looks like someone misspoke.

Edison would go on to patent more than 1,000 inventions, including the phonograph, incandescent light bulb, and a movie camera.

Van Gogh only sold one painting in his lifetime, just months before his death.

4. “Even the knowledge of my own fallibility cannot keep me from making mistakes. Only when I fall do I get up again.” – Vincent van Gogh

We’ve all head the name. In just over a decade, Vincent van Gogh produced more than 2,100 pieces of art — including 860 oil paintings and more than 1,300 watercolors, drawings, sketches and prints. But here’s a bit of trivia that I was surprised to learn: He only sold one painting during his lifetime, and that was months before his death.

Despite the toll his struggling art career took on him, both financially and emotionally, van Gogh continued to paint, saying, “For my part I know nothing with any certainty, but the sight of the stars makes me dream.”

Wanting to become an author from an early age, his family wanted him to become a minister, instead. Reaching a compromise, he enrolled at the University of Edinburgh studying literature. After his early works received mixed reviews, he printed the book Better Dead at his own expense which failed. He suffered another failed comic opera before penning Peter Pan, or the Boy Who Wouldn’t Grow Up, first performed in 1904.

It’s long been debated whether or not Albert Einstein had a learning disability, and while that may never be conclusively answered, it is a fact that he did have trouble learning and communicating in a traditional school setting– actually failing an entrance exam to the Swiss Federal Polytechnic in Zurich (if that’s not an argument against standardized testing I’m not sure what is).

He overcame that, however, and went on to win the Nobel prize in physics for uncovering the photoelectric effect, and his theory of relativity corrected the likes of Sir Isaac Newton.

Disney was told that he “lacked imagination.”

7. “Everyone falls down. Getting up is how you learn to walk.” – Walt Disney

Going to Disney is a staple growing up in America, but it’s not like Disney just walked into success. He was fired by a newspaper editor because he, “lacked imagination and had no good ideas.” He then faced a series of failures that included:

All of this before the finally successful premiere of the now classic “Snow White.” Maybe his lack of imagination was the best thing that ever happened to him.

So the next time someone tells you you can’t do something, don’t listen to ’em.