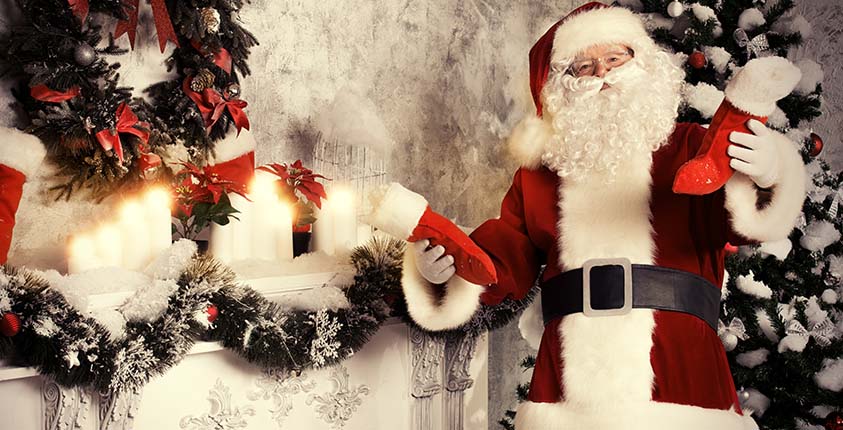 Don’t let the cynics fool you: Coca Cola didn’t invent Santa Claus. They didn’t create the modern image of Santa, either. Let’s get that out of the way off the bat. Contrary to urban legend, Santa was already a jolly fat man dressed in red and white long before Coke got their hands on him.

But there is something going on there, and there’s a reason that the urban legend is so easy to believe. Let’s take a closer look…

The modern Santa Claus is really an amalgamation of several earlier Christmas- or gift-giving figures, hence why there are so many names used for him interchangeably today (at least in the U.S.). But even in the 1800s, Saint Nicholas, Father Christmas, and Kris Kringle were all separate figures.

Saint Nicholas was a 4th century Christian saint famed for his secret gift-giving. His feast day was on December 6, and part of the celebration was giving gifts.

Father Christmas is a folkloric personification of the Christmas holiday dating back to the 15th century in England. He was a large, jolly, festive figure (often wearing red and white since the 1500s) who encourages everyone to eat, drink, and be merry (think the Ghost of Christmas Present from Charles Dickens’ A Christmas Carol).

Kris Kringle is an Americanized spelling of the German Christkindl, another gift-giving Christmas figure (with the appearance of Jesus as an infant), promoted by Martin Luther during the Protestant Reformation as a replacement for the Catholic-affiliated Saint Nicholas, this time with the celebration on Christmas Eve.

Over the course of the 19th century, these three figures all blended together. Take Saint Nicholas’s name (run through a couple intermediate translations to get to Santa Claus), Father Christmas’s appearance, and Christkindl’s celebration date, and you get Santa Claus. The poem “A Visit from St. Nicholas” (better known as “The Night Before Christmas”) and Thomas Nast’s illustrations of Santa over a period of 30 years are some of the most notable landmarks in the transition to a single, unified holiday figure.

Good thing, otherwise this guy would be coming down your chimney testing your theological orthodoxy.

Coca-Cola first got into the Santa business in the 1920s, but really initiated their most famous campaign in 1931. Haddon Sundblom illustrated Coke ads featuring Santa for various magazines, and continued to illustrate new ads until 1964. The campaign was incredibly successful, and so closely connected Coca-Cola with Santa Claus, that many people believe Coke actually created him!

But Saint Nick had been selling other products for years. He was selling mineral water and ginger ale for White Rock as early as 1915, and he was even selling Murad Turkish cigarettes by 1917, among many others.

Yet it was the Coca-Cola campaign that stuck. Why?

Coke didn’t invent Santa Claus. If anything, he may have done more for Coke than Coke did for him. Coke at the time was considered a warm-weather drink. To help grow, they focused advertising campaigns on presenting Coke as a drink for all seasons, and the Santa ads were a no-doubt home run.

Haddon Sundblom’s ad that changed it all.

In Saint Nick Coca-Cola found the perfect fit for how they wanted to advertise their product. He was a recognizable figure with the most positive branding in the world. Who’s more popular than a jolly old man who brings everyone presents? And his pre-existing image lined up perfectly with Coke: he was already dressed in their corporate colors, and his peak time, winter, was exactly the time period Coca-Cola was trying to reach into. The fit is almost too good, hence the urban legends. But sometimes truth is stranger than fiction!

The Coca-Cola Company did something better (and more practicable for fellow businesses!) than just invent Santa Claus; they engaged in perhaps the greatest act of brand anchoring ever. They found a brand even more famous and well-liked than their own, and hitched a ride on his sleigh. They borrowed Santa’s cultural cachet and let the positive emotions people feel toward him rub off onto their own brand.

Other companies had used (and continue to this day) Santa as an anchor for their brand, but the fit with Coke was seamless. It made an unforgettable impression that changed the advertising world.